Celebrating the halfway milestone in our ANCHORED Together appeal 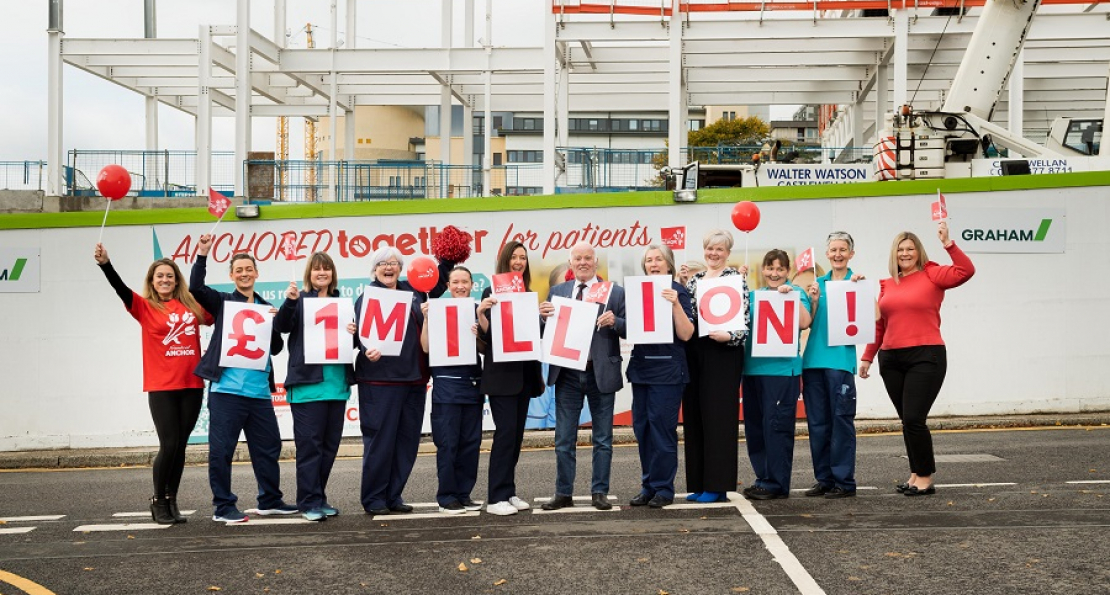 Friends of ANCHOR has raised £1 million to “deliver the difference” when a new oncology and haematology centre opens in 2023.

The charity is raising £2 million in total, to fund over-and-above additions for The ANCHOR Centre, which will be the first of its kind in the country, built at a Scottish Government capital cost of £43 million.

The news that the charity has hit the halfway milestone comes on the day it unveiled a billboard campaign at the site of the facility, which will be located on Foresterhill grounds in Aberdeen.

Three large billboards unveiled at the site of the new facility celebrate the charity’s partnership with NHS Grampian, in pursuit of their shared effort to ensure the best care is available for the 65,000 patients estimated to be treated in the Centre each year.

Friends of ANCHOR Chairman Jim Milne said: “Reaching the halfway point wouldn’t be possible without our donors and fundraisers who have come alongside with their generosity, time and fundraising commitment to support this campaign. To them, we say a huge thank you for getting us this far.

“When we launched our campaign back in 2019, we coined it ‘ANCHORED Together’ which encapsulates what has been at the centre of this campaign throughout – everyone working together to make this long-hoped-for dream a reality, and to deliver the difference for the people who will walk through the doors of the Centre for treatment.

“We are so fortunate to have the NHS in this country and to know this facility will soon be in place to match the excellence of clinical care delivered by the staff day in, day out, is tremendous news for the North-east of Scotland.”

The charity publicly launched its ANCHORED Together appeal in 2019, with its full fundraising calendar ringfenced to the campaign. The fundraising efforts and donations of individuals and companies also contributed to the increasing total, but the pandemic halted fundraising throughout 2020 and the first half of this year. The charity re-launched its appeal in May, having raised £975,121 at that time.

With the fundraising campaign now sitting at £1 million, the local charity must raise the remaining million before The ANCHOR Centre opens in summer 2023.

The funds will be ringfenced to equip the facility with improved equipment, upgraded furnishings like more comfortable treatment chairs, and enhancements including state of the art tech for a dedicated teaching and training suite.

The ANCHORED Together fundraising will also go towards the charity’s dedicated complementary therapy suite; a private room with a spa-like feel, where patients can enjoy Friends of ANCHOR’s relaxing therapies like massage, as well as practical support like podiatry and hair and wig styling.
Friends of ANCHOR has directly served the needs of oncology and haematology patients receiving care in NHS Grampian for nearly 25 years. The long-standing partnership with NHS Grampian has seen funds directed to equipment to transform treatment outcomes, research investment that enables clinical trials for NHS Grampian patients, spend to enhance clinical spaces, wellbeing services at the patient chair and bed side, and development opportunities for staff.

Gail Thomson, Deputy Project Director for the build and its sister facility, The Baird Family Hospital, commented on behalf of NHS Grampian and the project team: “Congratulations to Friends of ANCHOR in achieving this fundraising milestone. We are delighted to be working with such a prestigious local charity which has supported the ANCHOR service, staff, patients and families for close to 25 years. This long-standing relationship has helped cement what is important to patients and families, allowing us to make sure that we use the £43m funding from NHS Scotland wisely.

“We look forward to continuing to work with the charity and having some fun along the way while supporting and participating in some of the campaign's fundraising activities. This project is a huge priority for NHS Grampian and NHS Scotland.”

Friends of ANCHOR director Sarah-Jane Hogg added: “To raise the remaining £1m, we need the help of people across the North-east. When we launched the appeal, we could never have anticipated the challenges that would face us when fundraising ground to a halt due to the pandemic.

“Now, with events back in play and plans underway for our year of fundraising in 2022, there are so many exciting ways people can get involved to help make our £2m target a reality.

“As a charity, we are neither lottery nor trust-funded, so we solely rely on the generosity and support of the general public. We would encourage people to ANCHOR with us, be a part of the legacy and step into action to support our most ambitious fundraising appeal to date.”

With the charity’s operating costs covered by local firm Balmoral Group, 100% of donations will go to the appeal.

To make a donation or find out more about how you can get involved, visit Friends of ANCHOR - Anchored Together Campaign